Find this article at:
go.ncsu.edu/readext?620046
— Written By Luke Shealy 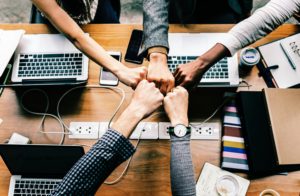 It can be incredibly hard to be an activist when the people above you in your organization don’t listen to you. In the “workplace”, whatever that looks like for you, we must be advocates for ourselves and others. This post comes from Bob and Nick Slater: a father and son duo who have written a book called “Look Out Above! The Young Professional’s Guide to Success”. This excerpt that they’ve provided is all about advocating for yourself when you’re at work or school.

By Bob and Nick Slater

Speaking “truth to power” refers to the practice of telling someone above you in the organization (namely, “power”) that the course of action they’ve embarked upon is a mistake and that a change of strategy, tactics, or direction is required. Often the success of any endeavor depends on the willingness of subordinates to speak up, effectively, to challenge decisions from above.

Consider the plight of both Union and Confederate officers at Gettysburg. The leader of each army—George Meade for the Union and Robert E. Lee for the Confederates—proposed what their subordinates considered to be a terrible plan. The outcome of the battle, and as it turned out the war, depended on who’s subordinates could effectively speak “truth to power.”

The setting was this: On day one of the battle the Confederate army pushed the fleeing bluecoats through the town of Gettysburg and onto the hill behind it. But they inexplicably ceased their pursuit and failed to capture the high ground. Overnight the Union army reinforced its position, and on day two the Confederates unsuccessfully assailed union positions on Little Round Top, Cemetery Hill, and Culp’s Hill. As darkness fell, leaders on each side gathered to discuss tactics for the next day.

In the southern camp, General Lee proposed another uphill assault, one that required the Confederate army to first march across almost one mile of open field with cannonballs raining down. James Longstreet, one of Lee’s most trusted officers, believed this plan was folly. He spoke to the losses that would be suffered crossing the field, and to the improbability of the surviving soldiers pushing the Union army backward up and over the ridge (with Union reinforcements waiting behind it). Having failed to capture the high ground, Longstreet advocated that the confederate army retreat from the battlefield.

In the northern camp, General Meade proposed that his army retreat from the battlefield. Winfield Scott Hancock and other officers believed this plan was folly. Their army held the high ground—a decisive strategic advantage—and retreating would squander it. They advocated to stay put and wait for the frontal assault they believed would be coming.

Meade insisted that his officers sign a statement indicating their view to remain and fight. Newly-appointed by Lincoln and unsure of himself, if things went badly he wanted something to prove that any decision to stay was endorsed by all his officers. A bold leader, for sure!

So what happened? Lee got testy at Longstreet’s “too defensive” advice and insisted that his plan to march the army across the field and attack be executed. Hancock and others convinced Meade not to retreat, but to remain on the high ground and fight. The rest of the story we all know: “Pickett’s Charge” failed and resulted in a decisive Union victory.

How do you give advice contrary to your boss’s action plan without offending? And how do you maximize the chances that your recommendation will be accepted? As a young professional, initiating a “truth to power” conversation with your boss must be thoughtfully considered. But you’re paid to contribute, and one way to add value where you work—and to differentiate yourself—is to speak up when you see trouble ahead. You may be closer to the situation than your boss or have knowledge that others do not. Have no illusions that your advice will always be welcome or followed and, if it’s not, proceed to execute your boss’s plan (assuming it’s not illegal or immoral). To increase the likelihood of being heard, and to do so without giving offense:

By following these steps you’ll increase the likelihood that your advice will be accepted and, if not, that your courage in proposing a different plan will be noticed and your stature will be enhanced. When you see unintended consequences from a proposed course of action, speak up!

Bob and Nick Slater are the co-authors of a just-released book entitled Look Out Above! Offering the perspectives of both a young professional (Nick) and a seasoned executive (Bob), Look Out Above! reveals the unspoken keys to workplace success—how to contribute, write, present, pitch ideas, lead and advocate in the manner valued in the workplace. See Look Out Above to learn more and order.

Have you ever spoke up when you didn’t agree with your boss?

If not, what prevented you from speaking up?

What is the importance of speaking truth to power?