Find this article at:
go.ncsu.edu/readext?844777
— Written By Nyawira Nyota 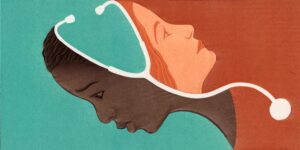 At only 19 years old, Kimberly almost lost her life. Kimberly is a college sophomore with asthma. On this specific day, she was experiencing chest pains and decided to go to the hospital. When she got there, she should’ve been seen immediately or as soon as possible but for her, a Black woman, that wasn’t the case. Kimberly arrived at the hospital at 11:30 a.m. with chest pains and didn’t see a doctor until 5 p.m. She was struggling with her pain in the waiting room, while simultaneously watching everyone who arrived after her, be seen and discharged before her.

When she was finally seen, the doctor diagnosed her with pneumonia, gave her antibiotics, and sent her home. Weeks after taking the antibiotics, she had chest pains again and felt sick. She called the hospital and told them how the antibiotics were making her feel and they told her she was overreacting and was wrong. After she got off the phone, she talked to her Residential Assistant (RA) and asked to be moved to a separate room so she doesn’t get her roommate sick. After being moved to her separate dorm and still feeling sick and having chest pains, she decided to call her regular doctor on facetime. Her doctor, a Black woman, tells her that the antibiotics she was taking were not only not helping her, but slowly killing her. After hearing that, she immediately stopped using the antibiotics and throws them away. She called the hospital and confronted them about how unfairly she was treated, not only having to wait in agony for hours, but for also giving her antibiotics that were doing the opposite of helping her, they were killing her. After going back and forth the hospital only apologized to her.

Kimberly’s story isn’t an isolated one, millions of Black women across this country are affected by medical racism and die at the hands of doctors who don’t see their pain as real. Deep-rooted structural and systemic racism aren’t just obstacles to addressing Black women’s healthcare- they are the health issue. Black women who go to hospitals are undertreated and oftentimes just are believed in their pain. This negligence is murder.

Kimberly’s story is not an isolated one, and it is not going to be the last time a Black woman gets unfair treatment or even no treatment at all in a medical center.

This traumatic and life-threatening experience lit a fire under Kimberly. She’s now hoping to go to nursing school and become a pediatric nurse. Like many others who’ve experienced medical racism, she is going to become the change she wants to see. Kimberly has a story and she’s going to use her voice and make sure it’s heard. Kimberly is the future of healthcare and she’s going to make sure proper healthcare is afforded to everyone.