Find this article at:
go.ncsu.edu/readext?689310
— Written By Luke Shealy 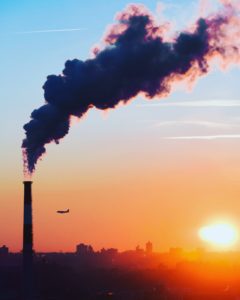 Environmental racism is the concept of discrimination in environmental policy that disproportionately affects ethnic minorities. This piece comes from two young authors discussing the ongoing challenge of environmental racism and how minority populations can often be exposed to higher levels of harmful pollutants.

By Orlee Lauren and Bertha Posada

There are many well-documented cases of discrimination against minorities. However environmental racism is particularly harmful, as it has been poorly publicized and has broad damaging implications on entire communities. In many cases of environmental racism the government has turned a blind eye to the devastating effects pollution has on already under-served groups. To combat this issue, climate justice activists are working to shed light on this problem and help minorities who experience environmental discrimination.

Recent reports demonstrate that environmental discrimination has led to health disparities. Harriet Washington, a science writer, has exposed how African American communities, often living and working in close proximity to factories, suffer from brain damage and other health problems. Build-up of neurotoxins in their bodies from environmental pollutants causes an increase in brain diseases and loss of cognition. Harriet Washington in her 2019 book, “A Terrible Thing to Waste” has pointed out that middle class African-American households live in neighborhoods that are more polluted than those of very poor white communities. In Baltimore almost all of the 37,500 children who were hospitalized from lead poisoning from 2003 to 2015 were African-American. In a similar study, a report by Washington University found that there is a “severe impact of environmental racism in black communities”. Black children who live in St. Louis are 2.4 times more likely to have lead in their blood and about 10 times more likely to be sent to an emergency room to be treated for asthma.

The challenge we are faced with as a nation is: how do we deal with lax environmental policies which ultimately harm our most vulnerable populations? Since taking office in 2017, the Trump administration has rolled back environmental protection legislation allowing power plants to increase emissions of hazardous pollutants such as mercury from factories into the surrounding environment. This proposed change in regulation has a disproportionate negative impact on vulnerable communities living near industrial power plants. There is evidence that people of color and people with disabilities are more likely to live in these areas, and suffer from health problems that originate from environmental pollutants.

When the government does not pass laws to protect the environment, everyone’s safety is at risk. While our government is currently condoning practices which harm the health of minority populations, we can work to curb these practices and stop the health disparity caused by environmental racism. Climate justice activists are educating citizens on the issue of environmental racism and the effects it has on low-income communities. We are advocating for underrepresented citizens and inspiring others to advocate for their own communities. Youth are playing an important role in instigating change. We encourage you to learn more about this issue, join an environmental organization, and work with legislatures to create and enforce laws that make our environment healthy and safe for everyone. Environmental activism will ensure that we address the silent discrimination which has infected our minority communities.