Find this article at:
go.ncsu.edu/readext?634089
— Written By Sam Chan and last updated by Maru Gonzalez 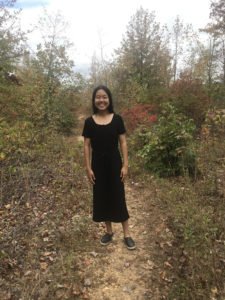 Eating disorders have the highest mortality rate of any psychiatric illness and affect millions of people across the United States every year, according to the National Eating Disorder Association. Despite their prevalence, misconceptions about eating disorders abound.

Alex, a 15-year-old advocate, is seeking to change that by fighting diet culture and the stigma around weight using her popular Instagram page, as well as contributing to the blog, Why The Foods. In this interview she talks about shattering common stereotypes about eating disorders and who they affect, and how she uses her platform to make an impact on people’s lives.

How did you get involved in work around eating disorders and mental health?

When I was in middle school, I struggled with an eating disorder that completely transformed my life. My disorder manifested as an obsession with “clean” eating, a tendency to compulsively exercise, and a deep fear of weight gain. I also experienced social withdrawal, mood instability, and symptoms of depression. However, after a lengthy, draining recovery process, I was able to recover fully.

Additionally, I have always been a perfectionist, and I tend to continually prioritize work over rest and recreation. This is something that a lot of people struggle with given modern-day “grind culture”. Unfortunately, our’s society glamorization of “grinding” can take a huge toll on mental health. Too many folks suffer in silence.

How do you make your voice heard about these issues?

Instagram is the primary medium for my work. Through my account @alexfoodfreedom, I aim to dismantle diet culture (more on that later), combat misconceptions of eating disorders and mental health, and assist those in recovery. I am also interested in highlighting how the diagnosis and treatment of eating disorders is fundamentally a social justice issue affected by things like weight stigma, racism, transphobia, homophobia, and poverty/food insecurity.

I am also a content writer for Why the Foods, a mental fitness brand that strives to empower people to make peace with food, movement, and body. I have been featured as a guest on the Why the Foods podcast and as an expert for the True Balance with Beth online book club as well!

What is diet culture?

Diet culture is a pervasive system of beliefs that frames body size as an indicator of moral worth. It idolizes thinness to the point that people engage in dangerous weight loss practices, exercise obsessively, and experience overwhelming guilt and stress about food because they want to achieve a smaller body.

Body size becomes grounds for political and social exclusion, and diet and exercise are seen as golden tickets for perfect health.

What are some common misconceptions about eating disorders?

Eating disorders are often seen as foolish diseases that only affect affluent white girls. This couldn’t be further from the truth, as people of all ages, races, genders, socioeconomic statuses, body sizes, and sexual orientations are affected.

For instance, all ethnic minority groups tend to experience a higher prevalence of binge-eating disorder. Furthermore, according to the National Eating Disorders Association (NEDA), black teenagers are 50% more likely to engage in bulimic behavior than their white peers.

Additionally, a 2015 study published in the Journal of Adolescent Health revealed that transgender college students are nearly 5 times more likely to report an eating disorder than cisgender students.

Lastly, older populations are not immune to eating disorders; in fact, between 1999 and 2009, eating disorder-related hospitalizations increased by 88% for patients aged 45-65.

Another popular misconception is that folks with eating disorders can just “choose” to eat more, or that eating disorders are a matter of willpower. In truth, they are devastating mental illnesses that result from deep-rooted issues like a desire for control, trauma, a lack of coping skills, and/or perfectionism.

How can young people combat these misconceptions?

Knowledge is essential, but knowledge without action effects little change.

Action can begin within one’s own social circle. Many young people make joking or demeaning comments about eating disorders, saying things like “I wish I had the willpower to not eat but I love food too much” or “I don’t understand – how can they just choose not to eat?” It is important to challenge those comments and get the speaker to reconsider the complexity and root causes of eating disorders. Language matters and can often reveal a worrisome lack of understanding or sensitivity.

Action can also be effected through writing, speech, and conversation. Start a social media campaign. Create a blog. If there is a mental health club at your school, initiate discussion about eating disorders. If not, start your own club! Attend mental health conferences. Volunteer with mental health organizations; talk to new people. There are so many opportunities available!

How does the stigma around eating disorders intersect with other marginalized identities?

Without a doubt, much like other mental illness, eating disorders are heavily stigmatized. They are associated with foolish self-starvation, vanity, and the veneration of models; this erroneous impression makes it less for likely for those struggling with eating disorders to speak out.

Individuals from marginalized backgrounds have it even worse. As aforementioned, eating disorders disproportionately affect people of color, LGBTQ+ folx, and those in larger bodies (young adults considered to be obese are 2.5x more likely to engage in disordered eating behaviors, yet only half as likely to be clinically diagnosed). This is because members of marginalized groups face a significant amount of stress in their daily lives. Behaviors like restriction, purging, and binging can serve as a way to cope with trauma and difficult emotions.

In addition to experiencing eating disorders at higher rates, marginalized folks are even less likely to seek help, and when they do in fact seek help, they face unique challenges in getting diagnosed and obtaining treatment.

Black woman, for instance, are only about 38.6% as likely to get diagnosed with an eating disorder as a white woman presenting with the same symptoms. There is horrible inequity in the field of eating disorders. Why is it important for young people to be activists? As cliche as it may sound, young people are the future. Adults have always underestimated the incredible potential for impact that youth possess. We are inclined to regard only older people as sources of leadership and wisdom. Yet youth offer a fresh outlook on the world, and it is becoming increasingly clear that we have the vision, ambition, and ability necessary to make waves. The future of this society, this planet, is on us; the time to begin leaving our mark is now.

Who is an activist that you admire?

I greatly admire Ryan Sheldon (he/him), an ambassador for the National Eating Disorders Association and a self-proclaimed eating disorder/body image activist. He is defying stereotypes each and every day, challenging the notion that eating disorders only affect females or that suffering from mental illness and speaking about mental health makes a man “weak” or “less masculine”. He also models, combating the ideal of a “perfect” male body. His work has helped so many people and is a revolutionary act of resistance.

Thanks to Alex for sharing more about her work! Follow her on Instagram @alexfoodfreedom to learn more!

If you or a loved one struggle with an eating disorder, feel free to reach out to National Eating Disorders Association.