Give Them Flowers While They’re Here

Find this article at:
go.ncsu.edu/readext?718714
— Written By Nyawira Nyota 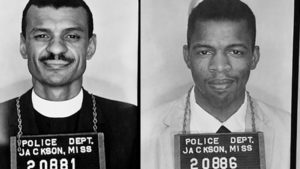 Thinking on the life and work of John Lewis and C.T. Vivian after their passing, one can’t help but remember many of their peers that had the right to become elders, not just in their community but in the eyes of the nation, stripped away. In so many cultures, elders are held in the highest regard because of their knowledge and experience, and for many Black leaders they were literally on the front lines of revolution–an unmatched source of experience. On the front lines of securing a right to live freely for the next generation. They were robbed of their lives and did not get to see their legacies in action.

I am hardly the first to mourn the loss of far too many leaders so early, but this notion was called in perspective for me after witnessing writer and activist, Angela Davis talking during these most recent calls to “#DefundThePolice”, with many reflecting for the first time on the state of prisons and policing in the United States. One of, if not the most, prolific voices in the discussion of prison abolition, mass incarceration and police brutality, Davis is one of the few Black revolutionaries alive to witness the fruits of her labor in the form of millions across the country calling for her thoughts to change the system. Seeing her able to offer sage advice and reference work she wrote years ago, reflected to me the uniqueness of her position.

The importance of adults in supporting youth activism is something we frequently discuss and encourage with a wealth of resources here at #PassTheMicYouth. Adults have access and knowledge that youth don’t always have, so their backing can often be invaluable.

When I remember Dr. Martin Luther King Jr., Huey P. Newton, Malcolm X, Stokely Carmichael, Patrice Lumumba and many others who died or were killed before collecting their flowers, becoming elders, and seeing the fruits of their work I am immeasurably grateful for the ones we have the chance to celebrate.

Representative John Lewis and C.T Vivian are those people. They got their flowers not just in death, but also in life. Among their many awards, the Presidential Medal of Freedom presented by the nation’s first Black president stands out as the most representative of their achievements and legacy. Their work cannot be overstated and while I am devastated by their passing, I cannot help but be glad at the recognition of their greatness and accomplishments. They are cemented as a great Black and American heroes.